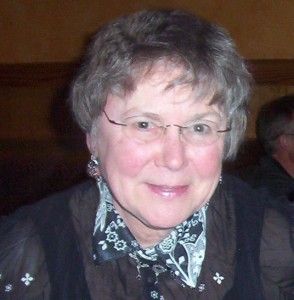 (Translation: “Martha Bishop, an unbelievably interesting and educated American from Georgia, has orchestrated the Renaissance of the Viola da Gamba.”)

Martha Bishop stays very busy in Atlanta, GA, as a composer and performer (viola da gamba, violone, cello).  Many of her compositions are for early instruments, with anniversary commissions from the Viola da Gamba Society of America and the Atlanta Baroque Orchestra.  Several pieces for gambas and recorders have won prizes, publication (PRB Publications, Susato Press) and two Sony recordings by Hille Perl.            She also writes for modern instruments, including a saxophone quartet, a flute sextet, an euphonium quartet, 3 string quartets, piano trio, solos with and without piano for clarinet, flute and bassoon, a song cycle and organ solos.  She has written many pieces for choir and for school string orchestra, one of which received a Carnegie Hall performance. Her music for modern instruments have received performances across the U.S. and in europe, and some are published by Tempo Press and Finale Make Music.

“In Nomine” for six viols performed in Chicago by Phillip Serna and friends, and at faculty concert of Mountain Collegium, both in June 2016.

“Noah’s Ark” on text of Marcia King, to be performed by St. Bartholomew’s Epicopal Church children’s choir in 2016

“Walking in and out of Step” for two tenor viols, performed on faculty concert at Music on the Mountain, Tenn., 2016

“For Lucy Lute” in honor of Lucy Cross to be performed in N.Y. at her Memorial service in December 2015.

“Irish Emeralds” to be performed by Providence High School, Charlotte, N.C. in 2015

“In Nomine for 6 viols given a wonderful performance at Viola da Gamba Society of America Conclave in Oxford Ohio, summer 2014

“Prelude and Fugue, Trope on In Nomine, and Hijaz” published by PRB Publications No. 34, 2014

“A Christmas Wish” for SATB choir and vibraphone, lyrics by Eugene Field.  June 2016

“Credo in Unum Deum” for SATB choir with some divisi, June 2015